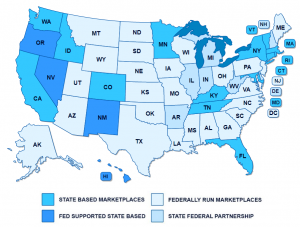 The Marketplace in Your State

The health insurance marketplace (also known as the Health Insurance Exchange) is where those who don’t have health insurance through an employer, parent, Medicare, or Medicaid, can enroll in a healthcare plan.

There is a health insurance marketplace in every state; some are operated by the state and some by the federal government.

How Much Does Health Insurance Cost Nationwide?

Americans pay wildly different health insurance premiums. This expense is no longer determined by health condition or gender (thanks to the Affordable Care Act) but is instead dictated by a range of different factors: type of plan (employer, individual or family), the state, age, tobacco use, and size of the employing company.

In 2019, average annual premiums for covered workers reached $7,188 for individual coverage and $20,576 for family coverage. Individuals and families contributed an average of $1,242 and $6,015 respectively, with employers paying most of the bill.

How to Manage Healthcare Costs

1. Match Health Insurance with Your Needs

Although no longer mandatory in most states, everyone should have health insurance to cover them should major healthcare issues arise. The type of coverage required for more routine expenses, however, depends on your unique health.

For example, a young and fit individual who rarely sees a doctor is better suited to a plan with a high-deductible than an individual in poorer health. The premiums will be more expensive, but it should reduce out-of-pocket expenses for medical treatment.

2. Know What Your Plan Covers

Just because you have a health insurance plan, it doesn’t mean you’re covered for everything.  Ideally, before you enroll, you should pay attention to precisely what treatments are covered, the out-of-pocket costs and caps on expenses covered.

3. Have Money Set Aside for Out-Of-Pocket Expenses

Failure to plan can be a big mistake, especially in the realm of health insurance. Making plans for long-term care and saving to afford care should all be part of your overall plan. The sooner you plan for your long-term healthcare decisions, the better.

Can You Get Health Insurance in a Different State?

No. You can only buy health insurance in the state in which you have your permanent address. Should you move to another state, a separate health insurance plan is required. If you have permanent residences in more than one state, you can purchase a plan in either state.

If you live in Massachusetts, New Jersey, Vermont, California, Rhode Island, or D.C., you may have to pay a penalty for not having health insurance: To avoid a penalty, individuals can enroll in a health insurance plan during the open enrollment period.

Which States Have the Cheapest Health Insurance?

While many have access to quality health care, other Americans face barriers to the costs involved. Studies show the five states with the most affordable healthcare costs: